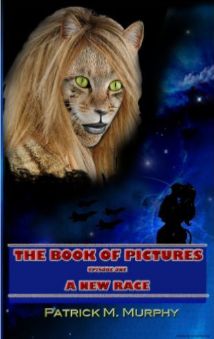 The Book of Pictures - A New Race (Episode one)

Título: "The Book of Pictures - A New Race (Episode one)”

Adrian is an unbelievably rich twenty-six year old introverted recluse with a secret. Aside from the fact he is still a virgin, no one has an inkling the Patents which made him rich come from dreams he has of cat-people, dog-people, and bear-people on an alien world called Eros. His dreams might be a secret on Earth, but everyone on Eros has heard of the furless man depicted in the ancient Book of Pictures. The furless man is supposed to end the five hundred year old war between Eros and the reptile-people of the Gorlon Empire. It would all be so easy if they only knew where to find this furless man. The head sorcerer on Eros searches him out in the celestial flow that binds all sentient beings. He concentrates so hard to initiate the blue sparkling energy of the flow, he fails to see the King's daughter watching from the shadows of his library. Her cat heritage curiosity overcomes caution and she accidentally steps through the flow to Earth. It is love at first touch and the two twenty-six year old virgins are inconsolable when the sorcerer grabs her back to Eros. 500 lights years is not very far for a Princess in love. She makes it back to Earth with a few of her friends and sets in motions events that change how human beings see the cosmos. Adrian’s quiet life get complicated when the King wants his daughter back and a Gorlon assassin arrives to capture her no matter how many humans are killed. The Earth military complex wants her for the technology she has and a lot of good old boys just want to be the first to bag an alien. Sometimes a nerd in love cannot catch a break.